When Science is Ignored Because of Emotion

We Americans like to think of ourselves as the most advanced nation on earth.  We like to believe that as a nation we are far in advance of those societies that still succumb to crazy (or cruel) traditional practices such as female genital mutilation to keep women pure or practice wacky religious beliefs that worship the Queen’s husband.

However, the uncomfortable truth is that here in the US we have a number of weird and wacky beliefs of our own.  Some that we like to hold on to even in the face of overwhelming proven scientific evidence to the contrary.  While some of these strange beliefs are harmless and downright amusing, some blow up into full scale conspiracy theories whose adherents refuse to consider any evidence to the contrary.  If anyone tries to disprove their beliefs they have, of course, become part of the conspiracy.  Other strange beliefs cause unbelievable tension in our schools or even end up impacting on the health of people who become too scared to have routine vaccinations or take recommended medicines. 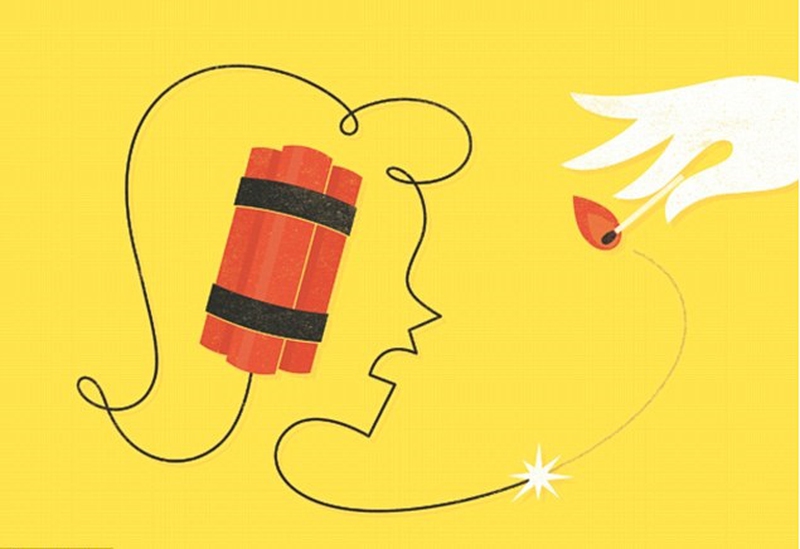 Otherwise intelligent Americans somehow do not grasp the scientific reality of global warming.

By now surely everyone accepts that the world is warming – yes?  No!  While there is a global scientific consensus that the temperature of the earth is increasing and that this increase is extremely likely to be caused by human activity, 54% of Americans believe that a lot of the problem is actually media hype.  59% of Americans believed that scientists were somewhat likely to have falsified their data to promote global warming and 35% thought that this was very likely indeed to have happened.

So why do some Americans persist in believing that Global Warming is not happening despite extensive evidence to the contrary?  Partly this is because America is not getting hotter.  In recent years there have been unprecedented cold snaps and heavy falls of snow.  It is very difficult to believe that the climate (what we experience over many years) is getting warmer when the weather (what we experience right now) is colder.

Organizations that work to educate others on global warming, such as Greenpeace, claim that the reason many people refuse to believe that it is happening is down to successful lobbying by big business for whom proposed industrial restrictions to protect the planet would be a huge expense.  Of course those who do not believe in Global Warming also believe that it is being promoted by a huge global warming industry, that the debate has been politicized and that there are flaws in the scientific studies that promote global warming as a problem.  Those who refuse to accept global warming are condemned as ‘deniers’

Perhaps the reason many Americans do not believe global warming is happening is because they have legitimate doubts, perhaps the reason others do believe it is happening is because the earth is getting warmer.  The truth is that there needs to be a rational debate on the topic with scientists allowed to publish papers which are fully peer reviewed and which have limited political and industrial input.

Fluoride in water is making us all stupid

Fluoride is in toothpaste.  The government is not trying to control you or make you dumber.  Or dumber that is.

Many countries choose to add fluoride to mains water supplies in order to protect children and adults from developing dental cavities. This practice started in the US in the 1940s and is proved to be a safe and cheap method of protecting those people who may not otherwise have access to good dental care and has positive benefits for people from all social classes.  The only known side effect is dental fluorosis which is a cosmetic effect on the surface of the teeth.

Almost from the very first moment fluoridation of drinking water was started people tried to paint it as a communist plot against the United States to reduce the intelligence and stamina of American children.  In the 1980s people were told that fluoride in water would cause them to be subject to mind control and that Nazis and Soviets had made prisoners drink fluoridated water for this exact purpose, although the claim was debunked by survivors and historians.  Fluoridation of drinking water has been hailed as a huge medical achievement by the CDC and the World Health Organization claims that it is a key measure in reducing the inequalities that people face in access to good dental health.

So why do Americans worry about fluoridation?  Well there are problems and dangers associated with fluoride overdoses (it is used in rat poison) but you would have to drink a lot of water (i.e. an impossible amount of water) to get anywhere close to those levels.  Many countries choose not to fluoridate their water supplies because of these controversies but the science shows us that fluoridation is safe in the concentrations currently used.

The Bible, specifically the Book of Genesis which is shared by the religious traditions of Christians and Jews tells us that God created the earth over a period of 6 days.  The King James Bible sets the date of creation at 4004 BC and this view appears to have been common; Shakespeare believed the earth to be 6000 years old.

Because the Judeo-Christian tradition was so ingrained in western culture it is not surprising that for hundreds of years many people believed the earth to be relatively young.  People believed that changes in the earth were made through a series of catastrophes.  However even 200 years ago geological discoveries were leading scientists to postulate that the earth was much older than previously thought and that changes happened incrementally.

Currently our scientific understanding is that the Earth is over 4 billion years old.  This is understood from analysis of certain isotopes used to date rocks, a review of the geologic and fossil record, analysis of meteorites and our growing understanding of the Solar System.  The Earth could even prove to be older than we think.

However this is not good enough for some Americans.  Over 40% of all Americans believe that God created humans less than 10,000 years ago.  Some school boards require teachers teaching evolution to refer to it only as theory and underline that it has not been proved, encouraging students to consider the theory of Intelligent Design (that humans did not evolve but were create by God).  It appears that a majority of Americans would prefer that creationism was taught alongside evolution and 38% would like it taught in place of evolution.

So why do so many Americans believe in creationism?  It is extremely hard for someone who believes in the scientifically proven process of evolution to understand why anyone should choose to believe in an outdated model.  It is fundamentally, however, a matter of faith and belief.  Americans are lucky to live in a society that protects the right of people to believe in what they want while mandating that science not religious beliefs are taught at school.

Don't get it twisted companies are trying to manipulate you with advertising.  But subliminal ads are myths.

These claims have been discredited when the scientist who ran the original study showing the effects of subliminal advertising admitted that he had lied.  Of course many people would rather convince themselves that subliminal advertising rather than their own weak will is responsible for them reaching for junk foods or making unnecessary purchases.

Much like the controversies that surround vaccinations people like to think that the medicine companies are engaged in a conspiracy with doctors to keep us all sick and invent diseases.  The drugs doctors prescribe, so they claim, are expensive, sometimes prove to be horrendously unsafe (think thalidomide) and often don’t make people better.  While ‘Big Pharma’ wants to make money out of suffering, so the believers tell us, we could actually cure modern day scourges like cancer by eating grapes and drinking carrot juice – chemotherapy is simply unnecessary.

What those who propose these beliefs fail to remember is that many people who are in receipt of expensive medicines are very sick and these medicines do not work quickly or sometimes, sadly, at all.  Put quite simply these claims are total rubbish and easily disproved.  Diseases such as cancer and diabetes are not a creation of industry.  These theories are not the musings of harmless crackpots, they can prevent people from seeking legitimate help for their illnesses in the hope that diet and alternative therapies can cure them.  It is both cruel and dangerous.  So why do people continue to believe?  Perhaps it is a result of the high cost of medical care in the USA; with treatments costing thousands of dollars it is comforting to think that a trip to the grocery store is more effective!

Area 51 and the great UFO cover up

Something does appear to have crashed in Roswell New Mexico back in 1947 which was then analyzed in Area 51.  From eye witness reports it appears that what crashed was not a UFO but a top secret high altitude balloon called Project Mogul which was being tested for use in the anti USSR spy program. The government response to reports of the crash was confused and secretive as it did its best to maintain the secrecy of the experiment.

The airstrip at Area 51 has a long history of use as a test facility, as in addition to Project Mogul, the area was used for U2 reconnaissance planes and project Oxcart (a replacement for the U2).  Captured Soviet aircraft were also evaluated here.  Because of the secretive nature of the work that was done there, access either on the ground or into the airspace is heavily restricted.  It was normal for the government to refuse to provide any information on Area 51 and usually references in any published materials are redacted.  It was only as late as 2013 that the CIA officially acknowledged that Area 51 even existed.  The many UFO sightings that have been made in the area are almost all attributable to U2 and Oxcart flights.

Despite all the information available more than 1/3 of Americans believe that UFOs exist and 1 in 10 believes that they have seen one.  Shockingly 80% believe that the US government has covered up information on UFOs.  Why do people believe this in the face of the evidence?  Possibly because reality is dry and dull but the stories of UFOs and government conspiracies are more accessible and, quite simply, fun!