Vietnam War: When Did It Start?

When did the Vietnam War start? Why did it happen? These might be the questions in your mind. A manifestation of the Cold War that pitted the communist Soviet Union and its allies against the United States and its allies, the war in Vietnam was a long conflict that began in 1954 and didn’t end until 1975.

The Vietnam War was fought between North Vietnam and its communist allies, along with the Viet Cong, who operated throughout South Vietnam, and South Vietnam and its principal ally, the United States. The conflict was also part of a larger regional battle between communism and democracy throughout the South Pacific and Indochina that was primarily fueled by the Soviet Union and China on one side and the United States on the other.

When Did the Vietnam War Start? How Did It Develop?

There is some debate as to the specific date on which American involvement in the Vietnam War began, as Congress never officially declared war. The war had begun earlier between North and South Vietnam, with the French as the original major ally to the South.
1

This is the date officially chosen by Congress to mark the deaths of Americans in Vietnam due to the establishment of MAAG by President Harry Truman. The Military Assistance Advisory Group of Indochina was established in September of 1950 when the French requested the help of the United States in their conflict with North Vietnam. The MAAG took over the responsibility of South Vietnam forces.

Ho Chi Minh had called for a “People’s War” in March of 1959 to unite the people of North and South Vietnam in the fight against the Western powers and under the banner of communism. In May of the same year construction began on a major supply network called the Ho Chi Minh Trail that would prove to be difficult for the US to shut down. This is also the date that North Vietnam’s war began against the US, also called the Second Indochina War.

The first United States military deployment in Vietnam took place on December 11, 1961 when an aircraft carrier loaded with thirty-three helicopters and around four hundred crewmen and troops arrived in Saigon, the capital of South Vietnam. On December 22, the first American combat death occurred, marking the start of the war for many Americans.

On August 2, 1964, American destroyers in the Gulf of Tonkin were engaged in battle by North Vietnamese navy torpedo boats. As a result, on August 7, Congress passed the Gulf of Tonkin Resolution allowing President Lyndon Johnson to take all necessary steps and use the full force of the United States military against the North Vietnamese, essentially waging war without an official declaration from Congress.

While around 23,000 American military advisors had already been in South Vietnam, on March 8, 1965 the first official combat units of the US military arrived in the country. This would lead to another decade of troop involvement. Many Americans consider this date the start of the Vietnam War, but military advisors had been in the country for over ten years, helping train the soldiers of South Vietnam, and some Americans had already died there due to the US involvement.

What Caused the Vietnam War?

The main cause for the Vietnam War was the United States’ desire to halt the spread of communism. The Cold War had been waging since the end of World War II with the United States and its Western allies pitted against the Soviet Union and China. Communism was having a great and growing influence in Indochina and what started out as a war of ideologies grew into a real military war with millions of deaths on both sides. The battle between North and South Vietnam was further complicated by the presence of the Viet Cong, communist allies of the North establishing themselves in South Vietnam.

During World War II the French colony of Indochina (Vietnam, Cambodia, and Laos) had been occupied by Japan. As a result, Ho Chi Minh called on the Vietnamese to fight the occupiers and take back their country. After the War the Vietnamese resented French rule and those in the North, with their communist backers began to wage a guerilla war. American involvement was based on the French asking for help and the US granting it in the name of fighting the spread of communism. 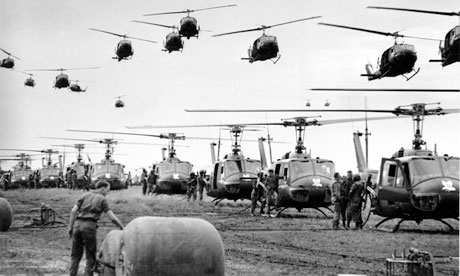 How Did the Vietnam War End?

Now you may have the answer to the question "When did the Vietnam War start?" But how did it end? What forces were involved in?

After years of a steady drawdown of American troops by both President Lyndon Johnson and President Richard Nixon, due in part to the success of North Vietnam’s 1968 Tet Offensive, the United States and South Vietnam signed a peace agreement with North Vietnam and the Viet Cong. The agreement was broken as the North Vietnamese and the Viet Cong continued to push further south. South Vietnam’s army was too weak to fight and the United States had few troop left in the country to help in any meaningful way. Thousands of civilians fled the fighting, crowding into Saigon looking for the US personnel left in the country to get them out. In 1975 Saigon fell to the North Vietnamese, the South surrendered, and the last of the American personnel stationed at the US embassy barely made it out. In 1976 North and South Vietnam were reunited under a single communist government and Saigon was renamed Ho Chi Minh City.

What Did the Vietnam War Bring?

There were many casualties of the Vietnam War, with over two million dead, including 58,000 Americans and many civilians. Many more refugees fled the country. The American use of the chemical defoliant Agent Orange to clear the jungle where soldiers were launching battles from permanently destroyed much of North Vietnam, leaving the land unable to be used. Many South Vietnamese who could not get out of the country were put in prison because of their alliance with the Americans.

The Vietnam War also struck a blow to America as it was the first war the country had lost. Many people had protested the war and deep divisions resulted, with many seeing the returning soldiers as criminals and treating them horribly. Many of those soldiers returned with Post-Traumatic Stress Disorder that went largely unrecognized and untreated at the time.

What Can Be Learned From the Vietnam War?

One of the biggest lessons of the Vietnam War was that the war was ultimately fought for an ideology and pride. Most look back on the Vietnam War as a terrible tragedy and a black mark in American history. Vietnam War also taught a lesson that we Americans were not omnipotent to do anything and war should, in any case, be the last option when there is absolutely no other way to solve the problem.