Some people just need a little kindness and understanding…or a nice smack right to the jaw. Here I'd like to count down my picks for the top 10 movie punches.

For this list, we’re looking at those big screen jabs and uppercuts that put villains in their place or good guys on their backs. We’re not really looking for epic beat downs though. Instead, we’re focusing on that one solid knockout punch. And we’re not counting any low blows. Sorry, Van Damme, but that's another list entirely, so don't forget to check out our Top 10 Movie Crotch Shots if you’re into that sort of thing! Also, some of these punches show up in pretty important scenes, so we’re going to go ahead and issue a spoiler alert. 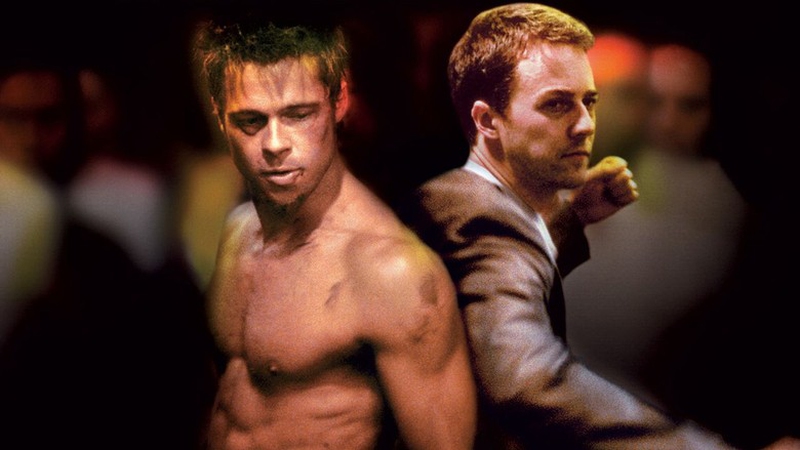 George McFly isn’t exactly the toughest guy in Hill Valley. He’d rather write sci-fi stories than throw down, but true love and his “density” are on the line. With the help of his new friend Marty – who’s also his time-traveling son – George plans on winning the heart of his high school crush with some “knight in shining armor” action. Only everything backfires when bully Biff Tannen shows up. But a faint heart never won the fair maiden, and George finally stands up to Biff…with one nice left hook to the jaw.

Here’s a movie that pulls no punches. Whether it’s the brutal Angel Face massacre or Ed Norton redecorating his boss’s office, “Fight Club” is jam-packed with knockout power. But it doesn’t get any better than the very first punch when the Narrator socks Tyler Durden in the ear. It’s the catalyst for the whole movie, and even better, it’s real. Director David Fincher told Norton to actually punch Brad Pitt in the ear. So when Tyler starts shouting in pain, it’s 100% genuine.

If aliens ever invade Earth, Captain Steven Hiller is the guy you want on the welcoming committee. Not only is he full of catchy one-liners, he also packs quite a punch. After the biggest mothership in movie history blows up the White House, it’s all-out war—only the humans aren’t exactly prepared. It seems the aliens are unstoppable, but it turns out they really suck at hand-to-hand combat. When Hiller lures one to the Grand Canyon, he welcomes the invader to Earth with a handshake…to the face.

After a long night partying in Vegas, three guys wake up to find a chicken in their living room, a baby in their closet, and their friend nowhere in sight. Even worse, they find themselves caught between a tiger and Mike Tyson. While trying to figure out what happened the night before, the Wolfpack learns they’ve kidnapped Mike Tyson’s big cat. And when the heavyweight champ comes to collect, their Phil Collins sing-along comes to a quick halt. But hey, at least he didn’t touch anyone’s ears.

When Nicolas Cage isn’t trying to figure out how things burn, he’s punching women in the face. A detective on the world’s creepiest island, Cage is searching for a missing girl, and obviously, the best way to crack a case is by using your fists. After knocking out a Kathy Bates lookalike, he dons a bear suit and finds the kid getting ready for a barbecue. What follows is one of the strangest scenes ever committed to celluloid and the weirdest punch ever thrown by an Oscar winner.

Sure, Hans Gruber and John McClane are awesome, but “Die Hard” is also loaded with a bunch of big-time jerks. There’s the Deputy Chief of Police, Special Agents Johnson and Johnson, and who can forget sleazy Harry Ellis? But the worst is definitely Richard Thornburg, a nosy reporter who exposes McClane’s identity and puts his wife in danger, all for the sake of a story. So when Holly gets her revenge and slugs him in the face, it’s the most satisfying part of the whole movie.

If there’s one guy you don’t want to tick off, it’s Les Grossman. This oversized, Diet Coke slurping producer is the angriest studio exec in Hollywood. He’s also incredibly creative when it comes to using four letter words. When director Damien Cockburn can’t keep his troupe of crazy actors under control, Grossman wants to tear the filmmaker apart…only they’re on opposite sides of the planet. Unfortunately for Cockburn, Grossman is pretty inventive when it comes to punishing his employees. Man, that looks like it hurt.

The second boxing movie to make our list, “Million Dollar Baby” follows Maggie Fitzgerald, a waitress-turned-boxer trying to escape her past by duking it out in the ring. With the help of a crusty manager and a one-eyed prizefighter, Maggie earns a shot against the vicious Billie “The Blue Bear” Osterman. Only instead of winning the championship belt, Maggie ends up on the mat thanks to a savage sucker punch. And with one cheap shot, the movie veers down a path you never saw coming.

When two high school losers are invited to a party, they hope to get lucky by bringing along some booze. Of course, they’re both underage, but that’s where Fogell comes in. He’s the guy with the fake ID—which isn’t too convincing. He isn’t wearing his vest, and he isn’t exactly calm under pressure, but it looks like McLovin’s plan might work until… That guy throwing the punch is Tim Trella, stunt coordinator for “Crank” and “Iron Man,” and it’s a hysterical ending to one hilarious scene.

Here’s a movie with plenty of bone-breaking blows. It’s a boxing film, after all, and when Jake LaMotta isn’t slugging it out in the ring, he’s busy bashing people at home. But the film’s greatest punch comes after Jake’s wife casually mentions his next opponent is a good-looking guy. Insane with jealousy, LaMotta decides to rearrange the poor kid’s face. Thanks to makeup artist Michael Westmore’s incredible work, Jake crushes that nose with one solid punch, and it’s enough to make you squirm in your seat.