Not very many people will take note of the numerous errors in movies, but even the best movies always have these errors. To the normal human eye, you might never notice them. However, to some people who are keen on details, they will notice an error as soon as they see. Some errors are very minimal and do not alter or interfere with the storyline, while others when noticed make you think twice.Below is a list of some of them, some of which you might never have noticed while watching your favorite movie.

While is in Area 51 denouncing deforestation and pollutions, he accidentally knocks over a bin labeled “Art Dept.” either there is an anti-pollution message in the act that we might have missed, but that casts a shadow on what he stands for.

At the end of the movie, Data tells a reporter that one of the scariest adventures was fighting a giant octopus. Now, if you watched the movie, there is no such scene. Actually, the scene was deleted and was never available in the theatrical release. Released in 1985, it was not until 1990 when Disney Channel begun airing The Goonies that that scene was available. It could have made sense if that part was eliminated too. Was it necessary? No?

Arnold Schwarzenegger or better known as commando established himself in the 1980s from the “Commando” series of movies. People enjoyed his actions and massive muscles so much that they never saw the error in the various movies he acted in. Most notable was the “Commando 1985.” Why is this the most outstanding mistake in any of the commando movies? We all know that the only way a car can repair itself is if it is a “Transformer.” In 1985, John Matrix’s car, a Porsche, repairs itself from one scene to another. How that happened, we will never know; however, that was a huge mistake from the producer.

The error can be found during the “Battle of Carthage.” A chariot will hit the wall an expose something that will make all keen watchers pause the movie and shake their heads. This chariot will hit the wall and reveals a gas canister. As far as technology and innovation is concerned, we all know how innovative the Romans were. However, we never heard anything about gas. Maybe we attended the wrong history class, but no way that was possible.

Mel Gibson has created very many amazing movies, with very many amazing errors though. In some of his movies, you will see a crewman walk past a scene or his/her shadow. The amazingly amazing thing about all these is that they still get to be released as part of the movie. Taking Braveheart for example, as the archaic war begins; we get to see a white ford cruise by. Yes. Here we have people fighting using naïve tools, and then a ford appears. Really Gibson? We could have accepted a white horse or something like that, but a Ford Transit?

Tarantino’s error in Pulp Fiction proves that everyone is human. He is a perfectionist, and you will not find as many errors in his movies as you would in some producers. In the hotel scene, just before the bullets start flying, you will see bullet holes behind the hit man. Just look as you will see them. These holes were supposed to be there after the shooting and not before, because no shooting had been witnessed in the hotel before that scene. How they got there and why, nobody knows.

North by Northwest is considered one of Hitchcock’s best thriller movie ever. However, this classic has a number of gaffes and one of them is just before the gunshots rent the air in the hotel. As if aware of the events, a young boy in the hotel covers his ears moments before the shots are heard. We never knew there was a supernatural in the movies, but if it were, then we were never told.It is evident that the boy must have known when the guns were going to be fired, and he covered his ears just before that happened. That is the only logical explanation to the gaffe in this movie.

Dennis Nerdy, the programmer who has now turned into a thief is chatting on a computer with his accomplice. If you look keenly though, Dennis is actually speaking to a prerecorded video instead. We expected much from the IT guy who did that, and even if it a recorded video was to be used, there is a way you can accomplish that without suspicion.

I bet you never saw this coming, but yes, Django Unchained has a gaffe that you should watch out for. Most people love Django “The D is Silent by the way,” and you might have missed the error in question concerns a set of shades worn by Tarantino’s revenge fantasy hero - the scene is supposed to be in 1856. As you might or might not know, shades are a Chinese invention and were invented in the 12th century. However, they were never introduced to the US up until 1929. So then, why do we have these shades in Django Unchained, a movie set in the1850s? While this is a major gaffe, very few people will actually stand up against Django and tell him that. 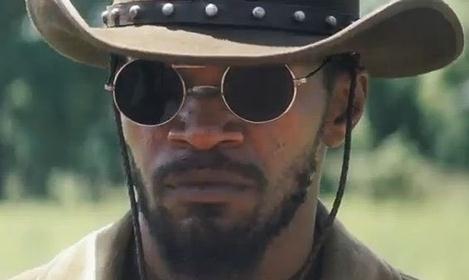 The third entry in the Terminator franchise (T3: Rise of the Machine) was released in 2003 as directed by Jonathan Mostow. It has its fair share of errors too. One of them is the mysterious change of John Connor's getaway Cessna 172 Skyhawk. A lesson from that is that you should not trust machines.