Challenge Your Guts: Woman Without Expression

There have been many bizarre cases reported all across the world, which seem unreal and scary. The people who are witnesses to such incidents claim it happened, while others simply refuse to believe in it. The episode of the expressionless is also quite similar. The story is hard to believe and is supposedly spun to create fear in the mind of people. However, the expressionless woman was as real as you and me for the people who saw her. 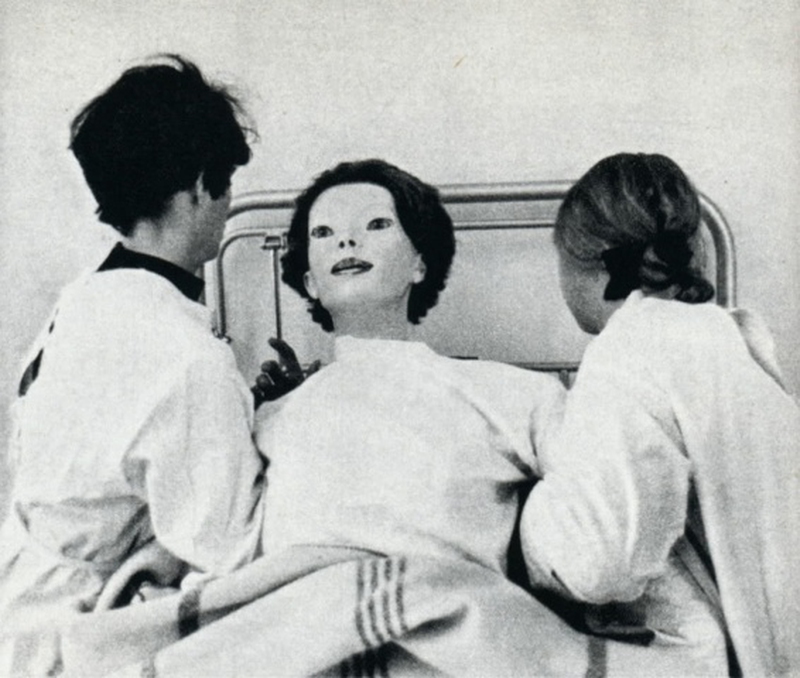 Expressionless woman story goes back to the year 1972. The incident happened in the Cedar Senai hospital in LA, California. Like an accident victim, a woman appeared in the hospital dressed in a blood covered, white gown in June 1972.

But there were some aspects of this 'victim' which separated her from other usual accident victims. She did not appear human and had a very mannequin like appearance. However, she would move around as a human being, very flexible and dexterous. She had no eye brows, a flawless face but lots of make up on her.

The other thing which scared most of the people in the hospital was that she had bitten a kitten in her mouth. It was an unnaturally tight grip, so that her teeth weren't visible and the blood was still gushing out of the kitten and dripping on her gown and the floor. As she entered, she removed the kitten and threw her aside and then collapsed on the floor.

The medics picked her up, carried her and cleaned her up. She remained calm throughout this devoid of any expressions or movements. The doctors got the expressionless restrained till the authorities arrived. No one was able to get any kind of response from her, and it was difficult for anyone to look at her for long.

Once the doctors tried to sedate her, she got extremely violent and tried to protest. Staff had to hold her down to the bed as her body rose, but she remained expressionless throughout the ordeal. Then she turned to the male doctor and did something unexpected—she smiled at him! When the lady doctor saw her smile, she screamed and let go of the expressionless, because she had long, sharp spikes instead of human teeth. The male doctor couldn't help but asking:" What in the hell are you?", but she bent her neck to her shoulders and looked at him smilingly.

The security was called over, and while they were approaching, the woman lunged forward towards the male doctor and sank her teeth in his throat. She ripped out the jugular and let the doctor fall on the ground gasping for air.

As he was lying on the floor, she got her face close to him and whispered that: "I am God." She left and approached the two security men, who met with the same fate as the doctor. The female doctor survived through the incident and she was the person who named this woman – The Expressionless. She was never seen again.

Part 2: Is the Expressionless Real?

Some people prefer a bet

This episode has been documented and there are witnesses who saw her getting admitted to the hospital. If this wasn't the case, it could well have been a scene from a scary movie. The police did not know what to make of this case and officially it got documented as neurotic behavior by an untamed lady who had sharpened her teeth.

Since she wasn't seen again for 40 years and hence there was no pattern. The nurses claimed that she was some sort of demon or some nutcase. It could also have been a prank where someone was made to do this entire act.

Others prefer a logical reasoning

The incident of the expressionless can be looked at from both perspectives – for and against.

Proof 1: To get the appearance of the expressionless woman, plastic surgery would be required, which wasn't so easily available in 1972. However, it could be done if the face was shaved and cosmetics used. Medical robes used during that time were similar to the one described as she had on.

Proof 2: The state of mind she was in – catatonic – could have been brought about due to ingestion of drugs or hallucinogens. This was evident when she reacted to being threatened with sedation. The extreme force exhibited by her could be due to autism or drugs. All her behavior can be pointed towards delusion, drug reactions or extreme psychosis. Drugs can cause a person to have extreme strength, with which she attacked the doctor and the security personnel. Brain damage can also be attributed to the behavior of the expressionless.

Proof 3: It does not seem logical that the doctor narrated his view of the incident to the person who documented the story, when he was gasping for air. Also, nobody seemed to have noticed the teeth of the woman when she removed the kitten from her mouth. Even with drugs, it seems hard to believe that this woman had enough strength to lift the people who were restraining her. The drugs along with an adrenaline rush seem unlikely.

Proof 4: The entire episode is creepy and the sole image which seems to be a recreation is very scary as well. The reactions of the people around her show that it was a fight-or-flight response, because she seemed threatening. If she appeared in a robe, she also seems to have escaped from a sanitarium, hospital or lab, which means she was not in the right state of mind. There are lots of logical inconsistencies and hence it seems to be not real.