Don't be fooled by stories about 19th-Century movie audiences losing their shit because they thought that footage of a moving train was going to run them over. Early cinema could get bizarrely hardcore and hardcorely bizarre, even by today's standards. In fact, many of the very earliest films still manage to put modern horror movies to shame. For instance ... 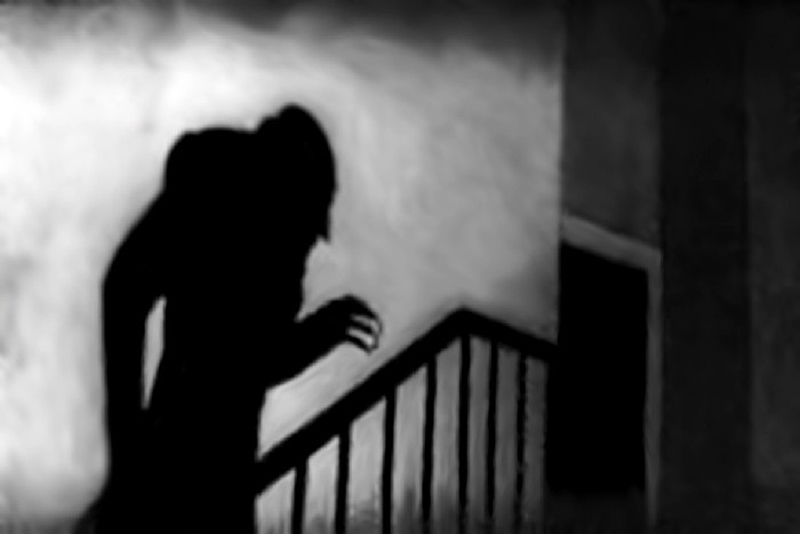 An adaptation of Dante's Divine Comedy, L'Inferno was Italy's earliest feature-length movie. It made use of many pioneering and sanity-noogie-ing special effects, which actually makes a lot of sense for a country that later gave us Salo and Cannibal Holocaust. Mostly set in Hell, the movie is full of shocking-for-the-1910s imagery, such as a decapitated man carrying his own head, the torture of people buried up to their necks in the ground ...

Of course, all of those scenes pale in comparison to the final image of a big-ass, three-mouthed Satan sitting on the horizon and munching on the bodies of Brutus and Cassius.

So he hired a director, gathered a bunch of actors, and recreated the 1587 beheading of Mary Stuart from start to uncensored-head-rolling finish (shit, even Game of Thrones cut away before that blade hit Sean Bean's neck). The 18-second film actually features the first trick edit, at the moment when the actress playing Mary is replaced with a mannequin. Normally we wouldn't bother pointing out that a movie didn't actually kill one of its actors, but when you're talking about a movie produced by a guy who was absolutely willing to publicly execute animals in order to sell his inventions, anything is possible.

The Peanut Vendor is one of the many reminders of why we'd never make it a day in pre-WWII times, when people let children watch Slender Man sing and dance in a cheap Halloween costume and thought nothing of it. The star of this 1930s experimental short is a pipe-cleaner monkey puppet singing along to an up-tempo jazz number and proving that there is no God.

The director Len Lye was said to have based the puppet's movements on his rumba-dancing wife. If that's even remotely true, then it's pretty obvious to us that The Peanut Vendor was less Lye's vanity project and more of a secret cry for help from an army of exorcists.

A Page of Madness is a 1926 experimental film (co-written by a future Nobel Prize winner) about a janitor whose wife has been committed to an insane asylum for trying to kill their child. It was considered lost for 45 years until we rediscovered it like a bunch of stupid idiots, so now we can all "enjoy" its super creepy ending, in which the janitor realizes that his wife will never get better, has a breakdown, and starts handing out nightmarish "happy" masks to the mental patients.

After one of the patients starts dancing, the whole asylum follows, and soon everyone is shaking their moneymakers to whatever messed-up music is playing in their heads. Our guess: the rhythmic screaming of children.

Some movies like to save their most shocking scenes for the end. Then again, some movies aren't The Man Who Laughs, which opens with a nobleman being sentenced to death in an iron maiden, while his son Gwynplaine is given surgery to force his face into a grotesque permanent smile. Flash forward to adulthood and Gwynplaine is making a pittance from working in a sideshow as some horrifying proto-Joker.

While we are clearly meant to sympathize with him, it doesn't help that he is smiling maniacally like that for the whole movie.

Oh, and we were serious with that Joker comment -- the comic book character was actually based on this movie's version of Gwynplaine, which itself was based on its director's hatred of his audience's ability to sleep at night.