When considering the crimes committed by the Nazi regime, the list of perpetrators that comes to mind is invariably male: Adolf Hitler and those brought to justice at the Nuremberg Trials, such as Karl Dönitz or Rudolf Hess. We often forget that behind the machismo attitude of the regime, there were also Nazi women. It’s calculated that around 500,000 women either witnessed or directly contributed to the regimes atrocities, whether they were secretaries, nurses, wives or SS guards. Their crimes are little known. 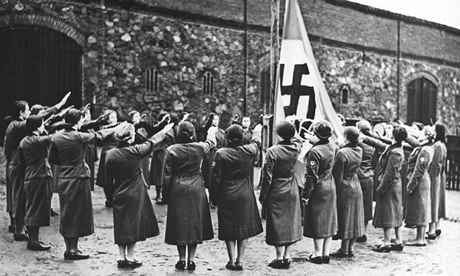 Amongst these “Nazi women”, there are some that stand out for committing some of the most notorious, most heinous crimes against humanity. From “The Beast of Buchenwald” to “The Hyena of Auschwitz”, here are the top 10 most monstrous female Nazi war criminals.
1

Surprisingly, one of the most notorious of the Nazi women was not a member of the SS. In fact, Ilse Koch was only a house wife. But her husband was the commander of 2 separate concentration camps and she used his authority to commit heinous atrocities. During her trial for war crimes, survivors detailed how Ilse Koch would inspect new arrivals at the camps for artistic tattoos, killing any that caught her eye so that the hapless victim could be skinned and the tattoo kept as a pretty souvenir. Despite being technically a civilian, Ilse Koch was convicted of war crimes and sentenced to life imprisonment, a term that ended with her suicide in 1967. 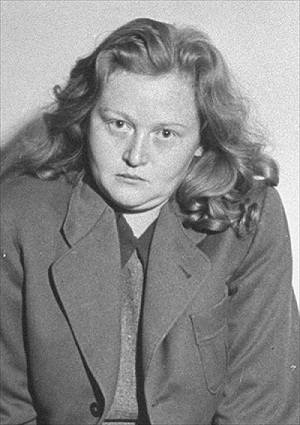 Dorothea Binz was a part of the war effort as early as 1939, starting out as a lowly camp guard, but later being appointed deputy chief ward at both Ravensbruck and then Buchenwald. During her tenure as deputy chief, Binz was known for personally whipping and beating the camp inmates, as well as casually shooting prisoners. But it was her attack on a prisoner at a forced labour assignment that makes “La Binz” worthy being included in this Nazi women list—she attacked and killed the hapless inmate with an axe. Despite escaping at the close of the war, Binz was found and brought back to face justice. Her brutal nature was exposed during her trial in 1947, where she was found guilty and sentenced to death. 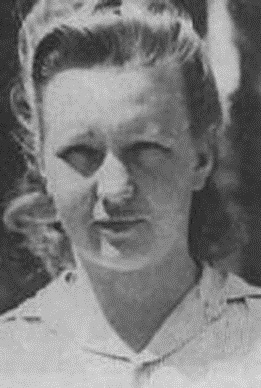 Irma Grese (AKA “The Hyena of Auschwitz”)

Serving as an SS guard in some of the most notorious of concentration camps, Irma Grese inspired fear and hatred in her charges, in particular because of her role selecting inmates for the gas chambers. Described as a woman of fastidious fashion and grooming, Grese was known for choosing not only the weak and ill but also any woman who had managed to hold onto her natural beauty. Evidently, rivals could not be tolerated. During her trial, survivors spoke of her extreme savagery, including sadistic beatings, casual shootings and using her attack dogs to maul prisoners. Grese was sentenced to death at the Belson Trial – she was only 22 years old at that time! 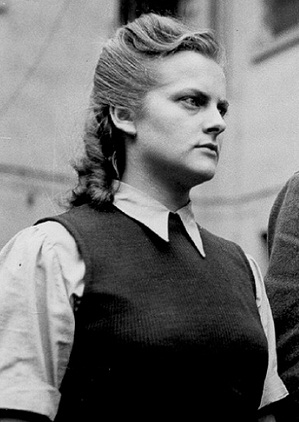 Johanna Altvater was working for the regional commissar in the Ukraine when she participated in a brutal annihilation. Whilst assisting with the closure of one of the Jewish ghettos, Altvater entered into a small hospital that was housing sick children. She then began to throw them out the third storey window, killing some and severely injuring others. It was this horrific cruelty to children that would become Fräulein Hanna’s legacy. The father of one of these murdered children testified, “Such sadism from a woman I have never seen.” Her defense, however, was that she was only a secretary, and as a result she was not punished for her crimes. 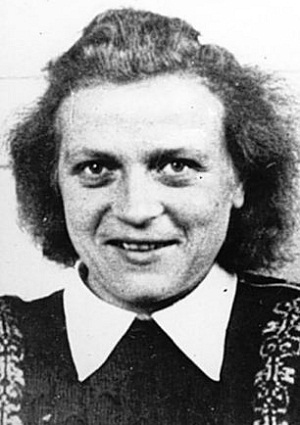 Unlike some women who were conscripted into service, Elisabeth Volkenrath actually volunteered for the job, eventually being appointed senior supervisor at the Bergen-Belsen concentration camp. Having trained under one of the most famous female Nazi war criminals, Dorothea Binz, Volkenrath was revealed to have been directly involved in the execution of prisoners, in addition to her “day job” of selecting inmates to be delivered to the gas chambers. In April of 1945, she was caught and arrested by the Allies, then forced to stand trial for her many crimes. Her guilty verdict was accompanied by the death sentence, and in December of the same year she was executed. 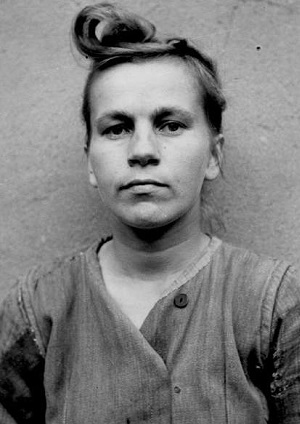 Juana Bormann (AKA “Wiesel” or “The Woman with the Dogs”)

Juana Bormann is another "excellent" example of monstrous Nazi women. To the captives of the concentration camps at Auschwitz, Ravensbruck and Bergen-Belson, Juana Bormann was “The Woman with the Dogs”. Usually accompanied by her German Shepherd, Bormann was known for using the beast to attack prisoners who provoked her ire. At her trial for war crimes, she admitted to having joined the Auxiliary SS voluntarily for the glorious purpose of making “more money”. Her legacy of sadistic management and extreme brutality was enough for the court to find her guilty, convicting her of murder and sentencing her to death, an order that was carried out in December of 1945. 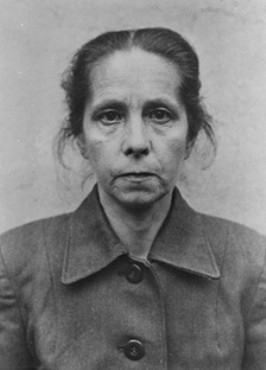 A nurse prior to the war, Greta Bosel was assigned as a work input overseer at the Ravensbruck concentration camp since 1939. This grandiose title meant that Bosel was one of the people who decided which prisoners would be sent directly to the gas chambers for execution and which were deemed strong enough to work. A famous quote attributed to Bosel and revealed during her hearing by the Hamburg Ravensbruck War Crimes Trial was “if they cannot work, let them rot.” Found guilty by the judiciary of taking part in the selection process, maltreatment and murder, Bosel was sentenced to death and executed in May 1945. 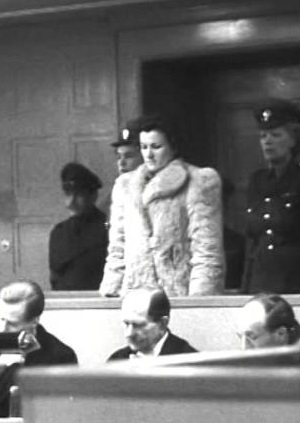 Erna Petri was another of these Nazi women who was “just a house wife”. Having moved to Poland with her husband, she reportedly lived in a mansion that overlooked the Race and Resettlement Office of the SS. Petri will go down in the annals of history as the housewife who murdered small children. On her way home one day, she was startled to discover six frightened little boys trying to hide. Recognizing them as Jewish escapees, she took the boys, who were between 6 and 12 years old, back to her home, comforted them and gave them some food. Then she took them to the woods and executed them, a crime for which she would eventually serve over 30 years in prison. 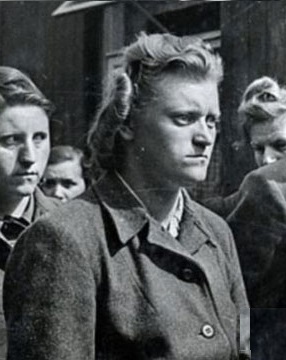 Hildegard Lächert was conscripted to join the Nazi women in 1942, at the age of 22. A mother of three small children, she would eventually serve as a guard at Auschwitz, Ravensbruck and Majdanek concentration camps. She was given the nickname “Bloody Brigette” by the camp inmates, who testified that she never stopped a beating until she had drawn blood. Following the Auschwitz Trial, Lächert was sentenced to 15 years in prison but was released after only nine. Then, in 1975 further charges were brought against her by the German government and she would serve another 12 years for setting her dog on prisoners, general abuse and for being part of the selection process. 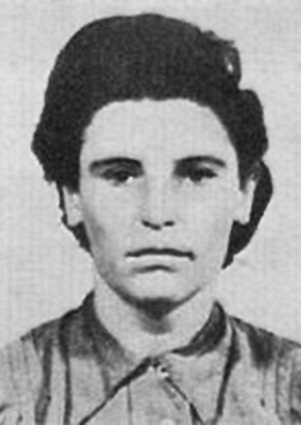 Herta Bothe (AKA “Sadist of Stutthoff”)

Conscripted to join the war effort in 1942, Herta Bothe was another Nazi nurse who became known for her viciousness. Based mostly near Danzig in the Stutthoff concentration camp, Bothe was assigned to be an overseer before being evacuated to evade the progressing Soviet army. After her capture by the Allies, Bothe was portrayed at her trial as being “brutal” and cold-blooded in her treatment of the prisoners. Despite this damning evidence, Bothe was sentenced to serve only ten years in jail, where she spent six years before being granted clemency by the British government. After her release she insisted that she made no mistakes, stating that if she hadn’t participated, then she herself would have been incarcerated in a camp. 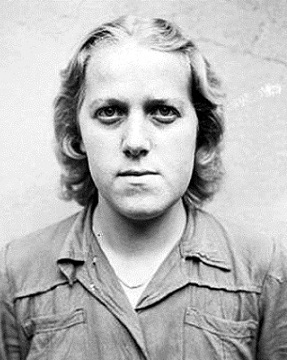