Moments of the World Cup All the Time

It’s only fair that the most dramatic tournament on earth would have a range of equally dramatic moments. Following up our recreation of historic World Cup moments in LEGO and as we head from the knockout stage to the quarter-finals in the 2014 FIFA World Cup, we recap 10 of the most iconic World Cup moments of all time. 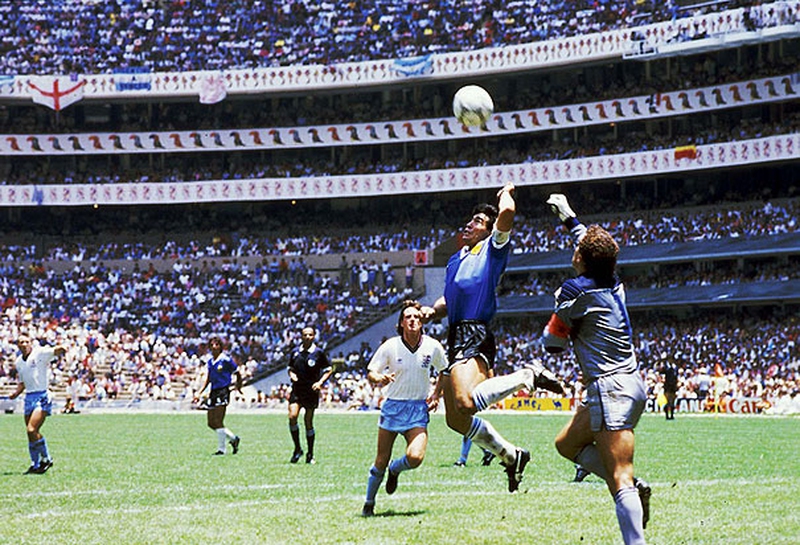 The enduring image of Espana ’82 is not a goal, a tackle, a foul or a pass, but a celebration. Marco Tardelli, arms shaking, eyes bulging, screaming at the heavens as he charges away, seconds after putting the Italians 2—0 ahead against Germany, and destined for their third title, their first in 44 years.

The Scots have a torrid World Cup record – 8 qualifications and never have they got out of their group. 1978 represents the sine quon non of this syndrome, swinging from the fantastic to the farcical and back again. They arrived in Argentina with high hopes, which were promptly battered by a Teofilo Cubillas-inspired Peru. They struggled to a one-all draw with Iran, before unleashing a typically Tartan performance, showing just what could have been by beating eventual finalists Holland, and going out on goal average anyway. The goal that beat the Dutch has gone down in World Cup lore, a jinking dribble and deft chip, an orgasmic moment immortalized in Trainspotting, as a climatic Renton exclaims: “I haven’t felt that good since Archie Gemmell scored against Holland in 1978!”

Holland had never qualified for the World Cup before 1974 but hopes were high. Dutch clubs had won the European Cup four times already in the ’70s, and their total voetbal brand of soccer was widely revered. Their star, Johan Cruyff, epitomized it, the conductor of an orchestra in which every player could play every instrument. His virtuoso piece, though, came against Sweden and announced the arrival of a new star on the world stage. Isolated in the corner and marked closely, Cruyff faked to go inside, dragged the ball between his own legs and span away, leaving Jan Olsson on his backside and jaws on the floor the world over.

Africa and the World Cup took some time to get to know each other. Though Egypt entered the first tournament in 1930, it took some 58 years for an African team to record a victory. FIFA, whose uselessness is nothing new, did not go out of their way to help. For a long time they made the African and Asian teams be content with one place between them, hardly conducive to their footballing development. By 1990, when Cameroon entered the stage, the reputation of African football was at a low ebb, widely ridiculed after the antics of the Zaire team at Mexico ’86. That, however, was all going to change.

Football, particularly in the rarified air of the World Cup, can come down to a matter of inches. From Geoff Hurst’s disputed goal in 1966 – no goal-line technology then – to Luis Suarez’s handball versus Ghana in 2010, fine margins and foul play have played a huge role in the history of the tournament. No moment combines the two like Toni Schumacher’s foul in 1982. With the scores tied at 1—1 in the second half, Michel Platini lofts the ball in behind the German defence, releasing Patrick Battiston. The Frenchman clips the ball past the onrushing Schumacher. The ball rolls agonizingly wide, and the goalkeeper – who had ample time to divert his course – clatters the attacker. The unconscious Battiston is stretchered off, his jaw broken and missing three teeth. The referee awards no more than a goal kick and the Germans go on to win, sparking outrage worldwide.

The head of Zinedine Zidane has had something of a controversial existence. The head-butt on Italian defender Marco Materazzi during the final of 2006 provided a sour ending to what was a great career, but to the French, Zidane will always be the hero of 1998.

Les Bleus, on home soil, in the final against Brazil, and Zidane took the game by the scruff of its neck, scoring twice. Both his goals in the final bear a resemblance, the same near-post dart, headers crashed solidly down into the net. France had so often lost agonizingly at the World Cup, and had failed even to qualify for the 1994 tournament, but there was no stopping Zidane, who elevated himself from a good player to a great, and his team from contenders to champions.

Statistics bear out Brazil’s place as football’s most successful nation but their position as its most loved is less easy to explain. After all, the next three most successful countries (Italy, Germany and Argentina) remain largely unloved, guilty of an association with negative football and gamesmanship, in sharp contrast to the widespread goodwill towards the selecao. The reputation of Brazil, the Brazil of samba football, the Pele-anointed protectors of the “beautiful game,” was earned in that golden period when football became a world game, when advances in technology brought their exotic flicks and tricks to television screens the world over. Everybody knew the Brazilians were good – they’d won in 58 and 62 – but it was not until 1970 that the image solidified in the public consciousness.

No moment more encapsulates joga bonito than Carlos Alberto’s goal in the final of 1970. The yellow of the shirts, the blue of the shorts and the green of the grass, a blur of technicolor as the ball is flicked to Pele, the tableau formed as as he holds it up, where we can all see Carlos Alberto, a whirlwind arriving into shot on the right, the slow motion delivery and the fast-forward finish across the goalkeeper. Football, elevated by film and shared with the world, seared into collective memory.

"The Hand of God,” Argentina vs. England, Quarter-Final 1986

To call Argentina’s quarter-final tie with England in 1986 politically charged would be something of an understatement. The Falklands War of 1982 was still very much fresh in the memory; in the UK, the tabloids lead with militaristic and jingoistic headlines, and in Argentina, the junta saw the match as perfect opportunity to restore some battered pride.

On the field, England had Gary Lineker, the tournament’s top scorer, but Argentina had Maradona, the man who would go on to define the tournament. El Diego exploded the tie open with a piece of cheating that still enrages England supporters and then closed it again with arguably the finest goal in World Cup history. It started innocuously, a pass, a deflection into the air and presumably simple claim for Peter Shilton – but as the ball looped towards the England keeper, an outstretched fist,“El Mano de Dio,” the “Hand of God,” appeared, punching the ball over the stranded Shilton and into the England net. The England players were outraged but referee Nasser gave the goal. The second, however, was a goal about which the English could not complain, and could only stand and admire. Maradona received the ball on the halfway line, turned and set off weaving through the defense, finally rounding Shilton and tapping in. Lineker later pulled one back, but the die was cast – as commentator Barry Davies put it: “You have to say that was fantastic."

As the clock ticked down in the second semi-final of Italia ’90, the ball breaks in the midfield. England’s star player, the enthusiastic, enigmatic man-child Paul “Gazza” Gascoigne, lunges wearily for the ball. Seconds late, he catches Thomas Berthold and the yellow card comes out. Gazza, knowing that a booking picked up against Belgium now ensures his suspension for the final, bursts into tears on the field, epitomizing in one moment the emotions of every England fan, embodying the history of the England side; the passion, the fleeting success and the inevitable valiant defeat.

The greatest player of his generation, playing his last ever game in the World Cup final. Having dragged his nation almost single-handedly through the group, the knockout stage and then given them the lead in the final, Zinedine Zidane was at the top of his game, ready to end his career on the ultimate high, as a world champion.

With the game in extra time and the ball well upfield, Zizou wanders back into position. He turns, his attention tweaked by the voice of Italy’s notorious central defender, Marco Materazzi. The words uttered remain unknown but the answer has gone down in history, as Zidane plants his iconic balding head on the chest of the Italian. Referee Horacio Elizondo has little choice but to dismiss the French captain, leaving his side to battle on in vain, eventually falling to defeat in the penalty shootout. Zidane returned to France in disgrace but was feted by French President Jacques Chirac, who praised his “professionalism and fighting spirit.”