Almost everyone who has used a computer has suffered losing important data and files because of hard drive corruption, hardware malfunction or a personal mistake. While everyone experiences data loss, a number of people don’t usually do anything to ensure that they don’t lose their data again.

Macs have a fair share of their own problems and though they aren’t the same as the ones found in Windows-run computers, they usually have the same outcome i.e. data loss. Mac hard drives can get disabled or corrupted, meanwhile Macs can also fail to start completely as well because of some reasons. The causes may differ but the result is normally loss of important data.

Apple’s very own Time Machine is the company’s own answer to the data loss issues suffered by Mac users. While the application is now accompanied with Mac OS X 10.5 and later versions, the backup software isn’t automatically available for users on older versions. The software stays true to its name as it is capable of restoring anything from your entire system to a single file to an older status back in time. So, whether you want to restore the Mac to an older time when it was backed up by the software or you want to see an older version of an edited file when it was backed up, Time Machine lets you do it all.

Time Machine’s best feature has to be its intuitive and simple user interface. Many people don’t like to use backup software as they are too complex. Time Machine makes backing data up a very fashionable thing with its stylish outlook and design. The software utility automatically backs up data either on an internal hard drive or an external hard-disk every hour and keeps on deleting older versions in order to save space on your backup drive.

Data Backup is one of the most powerful and flexible Mac Backup software utilities. The software has a very intuitive interface which makes it simple for anyone to back up their data. Data Backup offers a number of options with regards to where you want your data to be backed up as it can backup data to any drive whether it is fire wire, ATA, networked drive or a USB. The software creates an exact copy of your original file and you can synchronize it with your backup so that the software can keep on updating it in the backup drive as you update the original file.

Data Backup offers a number of powerful features including a ‘back in time’ feature that lets you see how many times the software has backed up files and how they looked when the backup was done. You can schedule backups on your own while the software creates backup schedules automatically as well. Another impressive feature is the creation of a bootable backup drive which lets you continue your work even if your main hard drive fails for any reason. 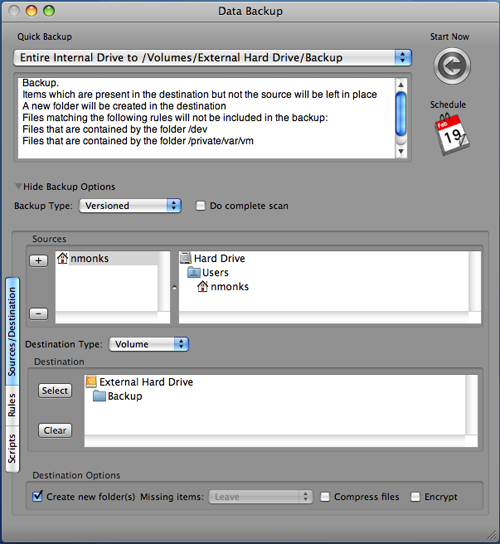 ChronoSync is a versatile Mac backup utility and it offers a range of impressive backup options for its users. The software can create backups on an internal or external hard drive which can then be used in order to restore data if you lose it somehow. ChronoSync doesn’t only backup your data, it also creates an archive for all the times when it backs up your data so that you can view and restore the version of a file you want. This means that ChronoSync doesn’t only keep a record of your newest file versions but keeps their older versions backed up too.

ChronoSync offers a variety of powerful options including the creation of a bootable backup which can get your Mac up and running even if the main hard drive doesn’t work. Another interesting option is of synchronization whereby ChronoSync would backup your data as you work on it and then as soon as you would connect the backup drive with another computer or system, it would update files in that system.

Carbon Copy Cloner is a strong and fast Mac Backup software which isn’t only powerful enough to back up your data, but also is fast enough to restore it when needed very quickly. Carbon Copy Cloner is capable of backing up your entire data on any external or internal drive with a simple retrieval method to restore that data to the original drive. The most interesting feature of the software is its capability to create a bootable backup which allows the backup drive to act as the main drive in case the main hard disk collapses or fails. With a simple transfer method, the bootable backup can then be transferred to the new hard drive which you would buy to replace the failed one.

Carbon Copy Cloner is also capable of incremental data backup whereby only those elements of your data are updated which get changed. This saves time and ensures that the backup doesn’t interrupt your work. You can also schedule the times when the software would start backing up your data with hourly, daily, weekly and monthly update options available.

Apart from these excellent features, SuperDuper! is also capable of forming a Sandbox mirror which you can use to test out any new application. The software automatically backs up your data though you can create a personalized schedule so that the backing up doesn’t interrupt you while you work. SuperDuper! is compatible with Mac OS X Lion, Leopard, Snow Leopard and Tiger.