The world loves interesting documentaries. Whether it’s a portrayal of animals in the wild, nations at war or the advancement of science, documentaries give us a glimpse into worlds that we may otherwise have never ventured into. National Geographic, The History Channel and Animal Planet have brought us some of the most intriguing programs ever filmed, but sometimes we miss the best of the best and don’t even know it. Today, let's explore some of the best and most interesting documentaries to capture our imaginations. 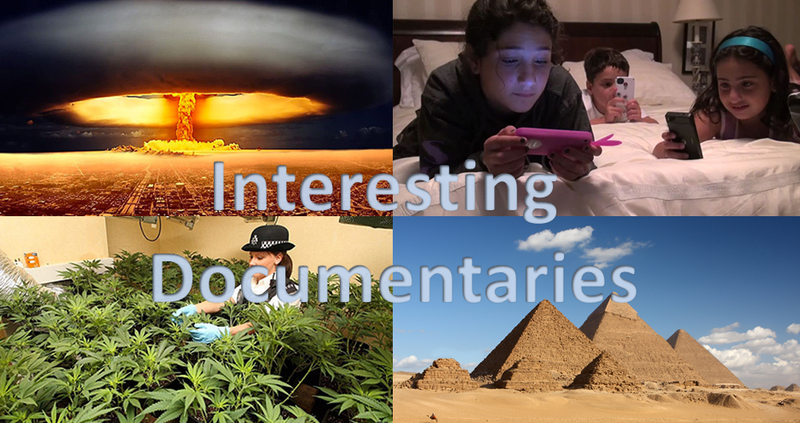 The Most Recommended - Egypt: Beyond the Pyramids

You say “Egypt” and people respond with “pyramids”. Beyond the obvious, this documentary aims to explore the fascinating lives and times of the ancient Egyptians. When watching this vivid piece by the History Channel, don’t expect any earth shattering new discoveries, but do expect a well-researched and enlightening TV series that is well worth watching. Much of the praise has to be given to writer/narrator Peter Woodward, whose enthusiasm for the subject should be enough to draw in even the most casual of observers.

Other Civilization Documentaries That You Shouldn’t Miss

The Persian Empire: Most Mysterious Civilization in the Ancient World

What The Ancients Did For Us

What the Ancients Knew

Secrets of the Ancient Empires

Seven Wonders of the Ancient World

The Crisis of Civilization

The Most Recommended - Earthlings

“Earthlings” is the story of man’s usage of the animal kingdom. Narrated by actor Joaquin Phoenix, this documentary leaves no stone unturned: animals in zoos, in scientific research facilities, traded for their fur or killed for their meat. It brings a very human element to an argument that is often downgraded to the category of “they’re only animals”. It is compelling watching, but be warned it is also incredibly graphic and disturbing viewing with scenes that will haunt you long after the film has ended.

Other Environmental Documentaries That You Shouldn’t Miss

Shift: Beyond the Numbers of the Climate Crisis

All Things Are Connected

The Fight For Amazonia

Flow: For Love Of Water

The World According To Monsanto

The Story of Stuff

The Most Recommended - Banksy’s Exit Through The Gift Shop

Thierry Guetta is a French shopkeeper who wanted to film street artists. Banksy is one of the most famous street artist in the world. Yet, as it turned out, Thierry was a terrible film maker who developed a flair for art; Banksy, intrigued by the footage but disappointed with the editing, decided to take over as director. It sounds like it should be a disaster, but instead, this documentary is informative, engaging and highly entertaining, a mix of political satire and good natured humour. So, what else to be said? The shooting process itself is already funny, won't it be one of the most interesting documentaries!

Other Art & Literature Documentaries That You Shouldn’t Miss

Lord Of The Rings: Facts Behind The Fiction

New Art and the Young Artists Behind It

Salvador Dali: A Master of the Modern Era

How Art Made The World: More Human Than Human

The Day Pictures Were Born

This Is Modern Art

The Most Recommended - The Fog Of War: Eleven Lessons from the Life of Robert S. McNamara

Former Secretary of Defense Robert S. McNamara has been described as provocative, influential and downright evil. Director Errol Morris spent 20 hours interviewing this powerhouse in an attempt to understand the man behind the title. McNamara, now in his 80’s, has a remarkable recollection of his experiences from World War II right through to the Vietnam War. Despite his claim that "in order to do good, one may have to do evil", McNamara provides some surprising insights into his views on war and the people involved.

Other War Documentaries That You Shouldn’t Miss

Psywar: The Real Battlefield Is Your Mind

The History of World War II

Robot Armies in the Future

The Never Ending War in Afghanistan

The Oil Factor: Behind The War On Terror

The Most Recommended - The History of the World in Two Hours

With such an ambitious title, it’s obvious that a few details are going to be left out. This is not an in-depth documentary, but it does provide a succinct overview of our planet’s history, albeit sometimes at warp speed. Beginning with Earth’s creation, it shuttles through mankind’s earliest beginnings, the birth of religion, the rise of agriculture and the development of society as we know. Whilst it won’t captivate serious history buffs, it’s an enjoyable and educational film for the kids.

Other History Documentaries That You Shouldn’t Miss

The Rise and Fall of the Third Reich

Rome: The Rise And Fall Of An Empire

History of Britain: The Myth of the Anglo-Saxon Invasion

The Vikings: Voyage To America

The Most Recommended - Isaac Newton: The Last Magician

Created as part of the “Genius of Invention” series of interesting documentaries by the BBC, this film explores the biography of one of the greatest minds of all-time. Isaac Newton was a heretic, an obsessive and a brilliant scientist, depending on your point of view. Revealing a reclusive nature and a determination to question everything, this film shows a side of Newton that many may have never considered. Regardless of your interest in science, this is an interesting look into the mind of a genius.

Other Biography Documentaries That You Shouldn’t Miss

Wayne Gretzky: The Life and Times

Mike Tyson: Beyond the Glory

The Legacy Of Michael Jordan

Nikola Tesla: The Greatest Mind of All Time

The Extraordinary Genius of Albert Einstein

Leonardo Da Vinci: The Man Who Wanted to Know Everything

The Most Recommended - Muhammad: The Legacy of a Prophet

One of the most argued-about figures in history, the prophet Muhammad has been the subject of countless books, movies and editorials. Yet, this documentary takes a different approach: it is simply told historically accurate and charmingly enacted. The end result is a powerful story that can be enjoyed by both Muslims and non-Muslims alike. Focusing on the character and the personality behind the religious figurehead, this film also looks at how the prophet is still affecting the lives of millions of people today.

Other Religion Documentaries That You Shouldn’t Miss

Ancient Egypt and The Alternative Story of Mankind’s Origins

Shamans of the Amazon

Before Babel: In Search of the First Language

The Secret Gate of Eden

The Life of Prophet Muhammad

The Life Of The Buddha

Myths of Mankind: The Mahabharata

Ayurveda: The Art of Being

The Most Recommended - What Are Dreams?

We all dream and we all talk about them. But how many of us actually understand them? “What Are Dreams?” strives to make the science of dreams more understandable for the common men. It looks at the different cycles we experience during sleep, the purposes they serve and the theories proposed by scientists throughout the ages. This is an interesting documentary film that will actually get you excited about the neuroscience of dreams to the point where you may even start monitoring your own!

Other Consciousness & Psychology Documentaries That You Shouldn’t Miss

Theory of Everything: GOD, Devils, Dimensions, Dragons & The Illusion of Reality

Neuroplasticity: The Brain That Changes Itself

How Smart Can We Get?

The Science of Lust

Superconscious Mind: How To Double Your Brain’s Performance

How Does Your Memory Work?

The Most Recommended - The True Story of Che Guevara

Che Guevara is a highly controversial figure, most often appearing at opposite ends of the public’s spectrum: he’s a figure that is either idolized or despised. As such, it is difficult to find a documentary that presents the facts, not the fanaticism of either party. This is where “The True Story of Che Guevara” excels – it gives a balanced portrayal of a very complicated man. There are no comparisons to Hitler, no radical statements and no dry monologues. Instead, it is a thought-provoking portrayal of a complex revolutionary.

Other Political Documentaries That You Shouldn’t Miss

Capitalism Is The Crisis

WikiLeaks: The Secret Life of a Superpower

The Killing of Yasser Arafat

The Most Recommended - The Beautiful Truth

Alternative medicine is an extremely controversial subject as highly praised as it is criticized. “The Beautiful Truth” looks at the success stories of those who have been treated using Gerson therapy, which emphasizes an organic plant-based diet to assist the body in healing itself. If you're into beauty and fitness, you'll find "The Beautiful Truth” is one of the interesting documentaries to your taste.

Other Health & Drugs Documentaries That You Shouldn’t Miss

The Truth About Vitamins

The Union: The Business Behind Getting High

How Marijuana Affects Your Health

Making a Killing: The Untold Story of Psychotropic Drugging

The War on Drugs: The Prison Industrial Complex

The Most Recommended - Our Secret Universe: The Hidden Life of the Cell

If you ask the average persons if they wanted to watch a documentary about biology and cells, chances are the response would be “no”. Perhaps to counteract this prejudice, the producers have outdone themselves in an attempt to produce an exciting and absorbing program…and they have succeeded. Delving into the world of cells and their response to viruses, this interesting documentary uses visuals that are as accurate as they are artistic. They have successfully condensed the basics of biology into an informative three-part miniseries.

Other Science Documentaries That You Shouldn’t Miss

The Complete History of Science

Quantum Mechanics: Fabric of the Cosmos

DNA: The Secret of Life

What Is The Higgs Boson?

The Most Recommended - Steve Jobs: One Last Thing

Steve Jobs, co-founder and former CEO of Apple Inc., was considered a gift to the world and a pioneer in the industries of music, movies and computer/phone technology. This short documentary, less than one hour, is not earth shattering, ground breaking or particularly revealing, but it is an interesting insight into a brilliant man. The film contains numerous interviews with those who knew and worked with Jobs, giving a balanced portrayal of the man behind the genius.

Other Digital Revolution & Technology Documentaries That You Shouldn’t Miss

How Robots Will Change the World

The Life Of A Young Entrepreneur

Inside Google: The Billion Dollar Machine

The Age of Big Data

Life In A Day