How to Use a Hyphen

You see them almost every day, yet, when it comes to how to use a hyphen correctly, you would be amazed at the number of people who pause in confusion. Fear no longer! After reading this article, never again will you pause in indecision when faced with a potential hyphen. 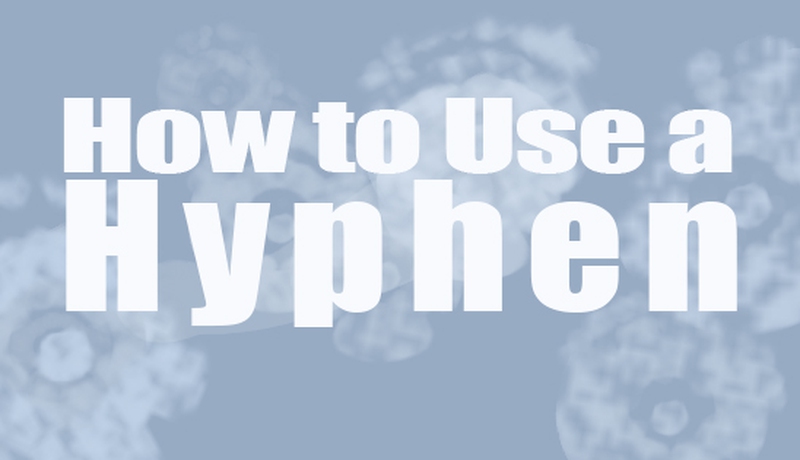 What Is a Hyphen?

What Exactly Is It?

Ok, so what exactly is a hyphen? The Oxford dictionary defines a hyphen as, “The sign (-) used to join words to indicate that they have a combined meaning or that they are linked in the grammar of a sentence.” It’s actually simpler than it sounds. Words that “have a combined meaning” are generally compound adjectives, AKA, two or more words that, when combined, form a describing word. When placed before a noun (a word used to identify a person, place or thing), they are known as “compound modifiers” and they get a hyphen. An example would be “long-term relationship”, because “long” and “term” each have separate meanings, but when you combine them together (“long-term”) they form a new meaning.

Why Do You Need Them?

How to Use a Hyphen Correctly

Now we know that hyphens are generally used with compound modifiers, but there are a few more cases where a hyphen will come in handy. Whilst the use of the hyphen seems to be under constant revision by grammar experts, the general consensus is that the following rules apply when discussing how to use a hyphen.
1

As already stated, a hyphen is needed to join two or more describing words that are used before a noun.

Remember though, that when compound modifiers come after a noun, they are not hyphenated.

You also need to use a hyphen when writing a compound number.

Sometimes a hyphen is necessary to avoid confusion caused by an awkward combination of letters.

Hyphens are used with prefixes (like ex-, all- or self- or between a prefix and a capitalized word), suffixes (such as –elect) and with figures or letters.

Sometimes you will find that a line of text does not have enough space for a full word at the end of the line, so a hyphen may be used to divide the last word. Only put the hyphen between syllables.

Another rule for line breaks applies to words that are already hyphenated. In this case, the line break would occur at the existing hyphen.

Line Breaks That Leave Only One Letter

Finally, never make a line break that leaves only one letter or either line, or in the case of a two letter suffix, such as "lovely", and don’t begin the new line with the two letter suffix.

Difference Between a Hyphen and a Dash

Now that you know how to use a hyphen, can you explain the difference between a hyphen and a dash? Your initial response may be to think, “aren't they the same?” Well, actually the difference is quite simple.
1

What Is a Hyphen?

Like explained above, a hyphen is the shorter mark, which does not have a space on either side of it.

What Is a Dash?

A dash is the longer mark that is used as a form of punctuation in a sentence. They are used to set apart and emphasize a particular part of a sentence. Picture a dash like a mental stop sign. The writer wants you to literally “hold that thought” and briefly consider something else. For example: