How Does Your Weight Change in an Elevator? 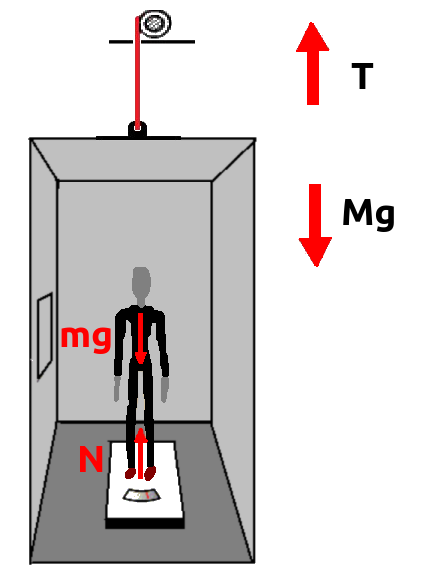 How Does Your Weight Change in an Elevator?

The actual weight (or weight) of an object on earth is the gravitational force exerted by the earth on the object. That is given by:

"M" is the mass of the object and "g" is the gravitational acceleration.

But the weight that you feel is apparent weight, that is the normal force (or the support force) exerted on you by the surface that is in contact with you. This force is the reaction force of the force you exert upon the surface, and it is not always the same as gravitational force acting on you. For instance when you are in free fall, you do not exert any force on the surface that is in contact with you, so the normal force acting on you is zero, and you feel weightless.

Equations of motion of elevator and a passenger inside it

Forces acting on an elevator (and everything inside it) are gravitational force "Mg", and an upward force that is the force of tension "T", in the cable of elevator, as shown in the picture. So if you assume that upward direction is positive and downward direction is negative, according to the Newton's second law, the equation of motion of elevator can be written as:

On the other hand, the forces acting on a passenger with mass "m" who is standing on a scale, are gravitational force, "mg", and an upward normal force "N", exerted by the surface of scale. So the equation of motion of passenger is:

So apparent weight of passenger is given by:

And the apparent weight of elevator is equal to "T".

When elevator is standing still or moving with constant speed, "a" is zero and the apparent weight of passenger is equal to his/her actual weight.

I am available to help you with your problems in Physics at: https://www.facebook.com/physicsassignmenthelp1/ an...