Animation is a type of medium that offers great visuals. Through animation, stories come to life, and with computer generated imagery, the world of animation seems almost real. However, not all animation offers positivity, there are some disturbing cartoons, which you should not let your kids see. The scary animated movies included in this list can really be troubling for children. 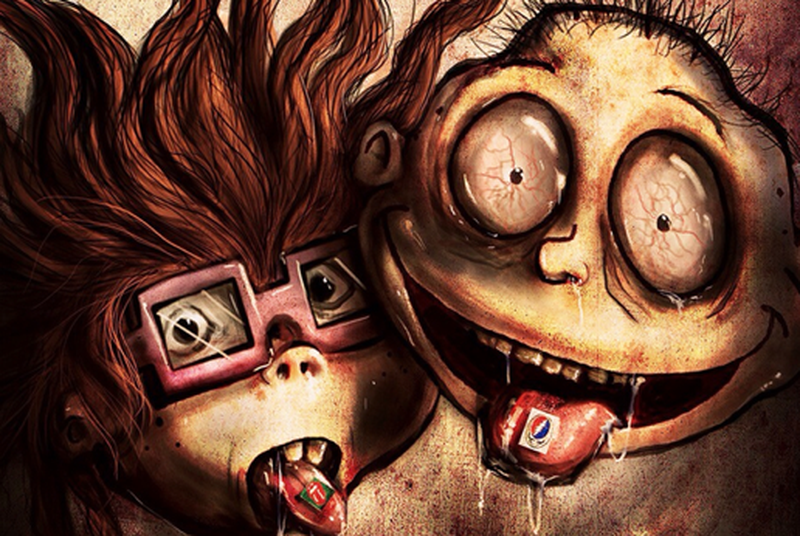 “Parametric Expression” made by Canadian artist Mike Pelletier tops our list of disturbing cartoons. It shows computer animated faces, which can sneer, smile and even distort in this very nightmarish and creepy video. This animation is rendered by modeling software MakeHuman which can translate any human movements in computer algorithms. Although adults may appreciate the algorithms and muscle movements, the tweaking of algorithms could be very creep and disturbing in the eyes of a child. Even though it may appear as a lifelike avatar, it does not cover any rationality, which children may not seem to understand.

“Wakfu” is a French cartoon, which was produced by Ankama Animation. The series is very popular in France, and it even has an MMO game video game, which carries the same name. “Wakfu” is a story which centers on a group of heroes that fights against the forces of evil, however, they are also capable of murdering innocent human and eating some of their remains. In one episode, they journey to the forest and find a pig, which they decide to devour. But the real catch of the story is that it is not really pig, it is human which just transformed into a pig by a bad witch. Eating pigs that are actually humans can really be disturbing to kids, so “Wakfu” makes the 2nd place in our list of disturbing cartoons.

This is probably the shortest animation in this disturbing cartoons list. It’s created by Brazilian born Canadian Dimitri Kozma. It is a story of Joe who suffers from bad breath, but what is disturbing is that he tries to solve the problem in unconventional and grotesque ways. The animation style of Kozma is characterized as a grotesque method of cartoon whimsy, which results in unnerving and apparently psychotic movements. The final scenes of the animation may seem to try to elicit laughter; however, you may want to look away because the scenes are much too disturbing.

“Pikadon” is written by Renzo Kinoshita, a popular Renzo Kinoshita. He is a director who received many television programs that had run from 60’s to 70’s. Initially, the film is created to produce a short animation. The first part of the film is gentle and almost comparable to Disney films. However, in the next scenes show the city of Hiroshima being bombed in 1945. The second part of the movie shows the full bloody horror, which happens during a war. The effects of war beat the rest choices and make “Pikadon” the 3rd in this list of disturbing cartoons.

Rodrigo Blaas, a popular animator of Pixar has created this film. Some of his works include “Cars”, “Up” and “The Incredibles.” In this film, “Alma”, meaning soul in Spanish, is the girl’s name. The movie starts innocently as the girl sees a doll inside a closed shop, which appears like her. She decides to break in to the shop and steel the doll. But aside from stealing, which is against morals and more frightening is that Alma has been trapped inside the doll with only her eyes moving. The dolls actually trap the souls of missing children as the rest of dolls shown with their moving eyes also in terror. The film itself can terrorize children, even cause nightmares.

Animator David Firth created “Crooked Rot.” Most of his works deal with depression and mental illness, though he keeps saying that he does not want to upset people. The whole film features the original score from Marcus Fjellstrom, a Swedish composer who is also well known for his creepiness. Meanwhile all the images and scenes on this film are all difficult to watch and are all disturbing not just for kids but for adults as well.

“Smile” is technically partially animated. Students of Bezalel Academy of Arts and Design at Jerusalem made the film. “Smile” is shown in YouTube and the whole concept, including the story, is really a great nightmare. All the characters in the film are giant, have rounded animated heads and are attached to normal bodies. The whole appearance of the characters is really unsettling, plus the conclusion of the film is really creepy that it will really runs on whoever watched it.

“Dog of Man” by David Firth is another disturbing cartoon that you shouldn’t let your kids watch. It tells a story of a man and the dog he owns. The simply animated film is about a weird relationship of man and dog. The tale shows Cronenbergian body horror in scenes like the electrical plugs have struck the skulls, leading to tumors, and dismemberment through the use of large knife. The animator may have tried to make the film soothing and comforting, but each dialogue is disturbing, and in the final act, it even shows the choking.

“Doll Face” was created by Los Angeles based filmmaker Andrew Huang. The short animation was released in 2005 and it tells the story of a robot doll, which itself is already scary and disturbing enough, that is mesmerized by a televised image of a woman. While scrutinizing the televised face, the robot doll’s tentacle arms appear to reach out for makeup products. As a whole, it is about the human’s effort to find the satisfactory, featuring in uninspiring images that are supplied by the mass media. The ending scene is somehow could be inspiring for grown-ups but really upsetting for young children.

“Escape from Hellview” is another film created by one of the alumnus of Bezalel Academy of Arts and Design. It seems this school is an expert at making disturbing cartoons, lol. At first, the audience may think it would be just as simple and good as an animation normally is. However, it will be thrown off the balance when the visual cues and nightmare begins. The film is about a little boy who opens a drawn door on the wall of his room and enters into a magical kingdom. The things that happen in that place is very vague, and there is a scene where the boy has to scream so hard that he can go back to the door. This desperate escape is really terrifying and disturbing to young audience.