Guide to Colon vs Semicolon

If someone ask you to explain colon vs semicolon, what would you say? "Well, the semicolon is the squiggle with the dot above it…” Most of us could probably recognize a colon and a semicolon, but do we know how to use them correctly? Today, let's look at the difference and the usage of colon vs semicolon together. 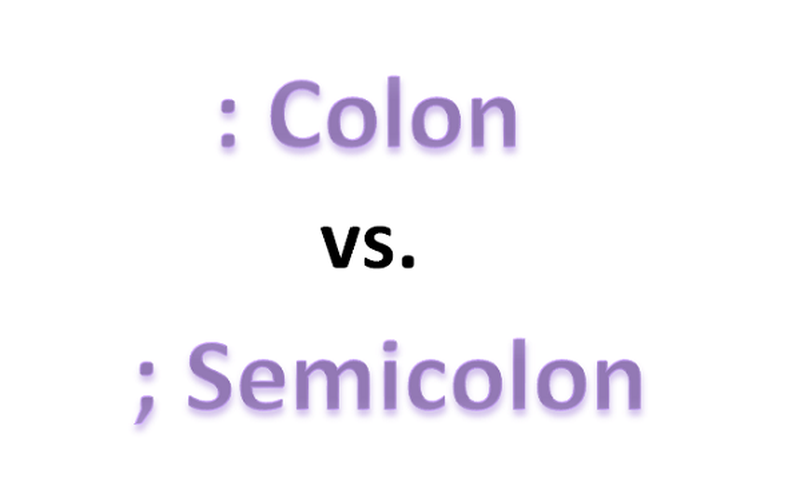 Colon vs Semicolon: What’s the Difference?

Colon vs Semicolon? If just look at their "names", you may think they are almost the same, but these two are quite different actually.
1

Basically, a semi colon (;) is like a half-way point between a comma and a full stop, which may be why it looks like a combination of the two! It creates a pause in a sentence which is not as absolute as a full stop but is heavier than a comma.

However, the colon (:), on the other hand, is more like the breath you take before relating associated information.

No wonder people get the two confused! They’re both pauses after all. Although we see them often enough when reading the newspaper or an online blog, we probably don’t get much practice with them in our day to day writing. Once we’re out of practice using something, it is easy to forget how to use that thing correctly, and then become afraid of using it altogether. Perhaps this is why so many people rely too heavily on the comma and the full stop over utilizing these two grammar symbols — using them is like bravely venturing into the untested waters of the semicolon vs colon.

Colon vs Semicolon: How to Use Them Correctly

So semicolon vs colon, how do we use them correctly? In what situations should the two be used? And how can we remember which is which?
1

As already stated, a colon (:) is a pause that announces to the reader that information is about to follow that relates back to the previous statement. One of the most common usages of the colon is to introduce a list, for example, “This article is about two things: semicolons and colons.” The beginning of the sentence lets you know that there is going to be a list of points contained with the article, and then the colon introduces that list.

Another common use of the colon is to introduce an explanation, a definition or a statement. For example, "Colon: a punctuation mark (:) indicating that a writer is introducing a definition."

Semicolons are generally used to join two written passages which could each function as separate sentences, but share a relationship that the writer wants the reader to understand. For example, “In Australian, they call it soccer; in England, they call it football.”

The semicolon is also used in conjunction with "connector words", officially referred to as "conjunctive adverbs", such as "nevertheless", "however", "therefore". In this instance, the semicolon is used to link two clauses that are separated by one of these "connector words". For example, “I did not read the legal brief; however, I believe I understood the gist of the argument.” When used in this way, a comma should be used after the "connector word".

Finally, semicolons should be used to separate items in a list when those items contain their own punctuation. For example, “I hate the following foods: milk, when it’s been boiled; chicken, but only the drumstick and wing; porridge, when it doesn’t have any sugar.”