Carnelia, which is also spelled as cornelian, is a brown-red mineral commonly used as semi-precious gemstone. It is of the silica mineral chalcedony kind covered by iron oxide impurities. Carnelian can greatly vary in color as they range from intense/almost black to a pale orange. This semi-precious gemstone is commonly found in Germany, Siberia, India and Brazil. 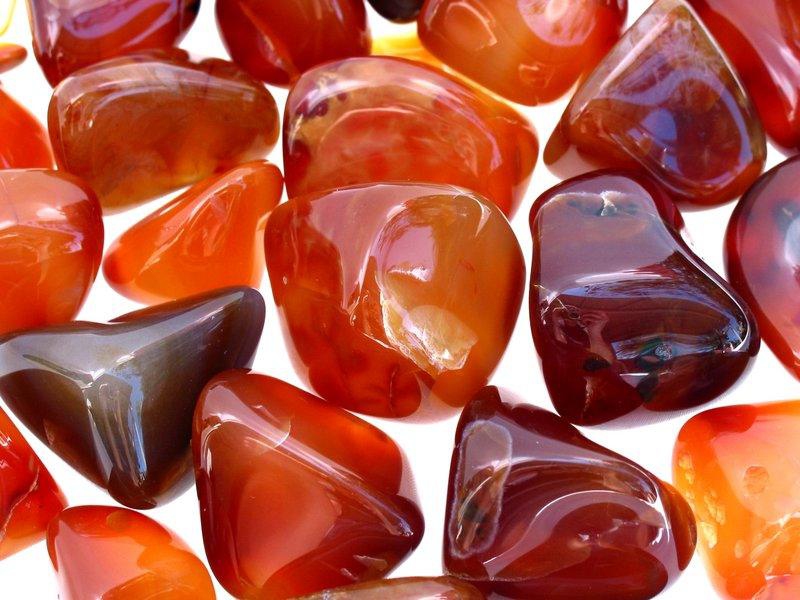 Legend and History Facts About Carnelian

Carnelian is a gem that has been used for the last thousands of years. It was recorded to have been first used somewhere between the 4th and 5th millennia BC.
1

In ancient Egypt, the carnelian was believed to give people protection in the afterlife, and it can also ward off evil spirits. Many nobles and priests were buried with the carnelian stone.

This stone has also been found in Japanese burial mounds for the Iron Age. As such, the carnelian was a great gem in almost all great civilizations.

It was believed that carnelian was the first stone in Aaron’s breastplate, from which our modern day birthstones are derived.

This stone was considered to be valuable even in 1700 BC to the Minoans. They had established trade routes to Scandinavia, Afghanistan, Egypt, Cyprus and Turkey from Knossos. They were trading important goods like gold, lapis, amethyst and carnelian.

Ancient Romans believed that lighter carnelian represented females while the darker ones, male.

In many Middle East countries, even today, there is a traditional belief that a person who has been looked upon by an envious glance or ill-meaning person loses his fortune. This is unless the person is wearing a carnelian that has been engraved with the appropriate prayer. The prayer was said to be for removing the covetous looks thus rendering them harmless.

According to legend, Mohammad’s seal was a carnelian that was engraved and set in his silver ring. This is a possibility especially when you consider that the carnelian was used back in the day as a signatory seal.

The Carnelian is a sunstone that can absorb the sun’s energy to get a radiant, hot color. It is also a stone of love, faith and truth that will protect the family and life of the one who wears it. In ancient Egypt, the Carnelian was described as “sunset that has been enclosed in stone”. This is because of its feng shui properties that give it protective and energy activating qualities. In the feng shui gem tree, the Carnelian is also used with citrine for wealth and in amulets and bracelets. This gem is also linked to the flow of balance.
1

The Carnelian gives physical energy and courage, boosts creativity and increases compassion and personal power. Carrying or wearing the Carnelian can also enhance will and vitality thereby providing you with the energy needed when approaching new projects.

Several superstitions and legends are linked to the Carnelian. In antiquity, many people believe that it has strong magical capabilities. That is why they use it for various talismans and amulets. In Pharaoic Egypt, this gem symbolizes life. It is also the gem that adorns Tutankhamun funerary pectoral. Different items made of this gem have been found on Tutankhamun mummy. For example, a snake’s head to keep the pharaoh’s head safe from snakes in the other world, heart shaped pendant that symbolize a soul that is eternally alive. Ancient Greeks also made Psyche and Cupid images using Carnelian gemmas. Such gemmas were true love talismans. The Greeks used such gemmas to determine whether the feeling of love was real. If the feeling was real, the gem would start sparkling when the other partner looked at it.

Wear the Carnelian in a necklace that is hanging low near the solar plexus. This body part is linked to solar energy and life force. Wearing the carnelian close to the solar plexus will make you feel excited and motivated about life.

If you would like to boost your mind with stamina and energy, wear carnelian earrings. This is a wonderful coffee alternative. However, make sure that you remove them the minute you start getting a migraine.

Pranayama techniques work with breath and life force (Prana), which you inhale when you breathe. A basic pattern is breathing in via the nose, holding it for a second and then releasing it out via the nose for a second. This will work better with holding a carnelian. Go at your pace gently.

When working with a red-hued gem like the carnelian, be aware that you may have to clear and clean them of old energy. If you have a migraine or feel overly energized, confirm whether you are wearing gemstones or red crystals. They may need a cleansing first.