Used as a celebration to honor the coronation of King Alfonso VIII, bullfighting has become one of the most iconic traditions in Spain. As a bloody and violent sport, bullfighting in Spain is very controversial, creating continual disputes between the moral activists and the die-hard fans. 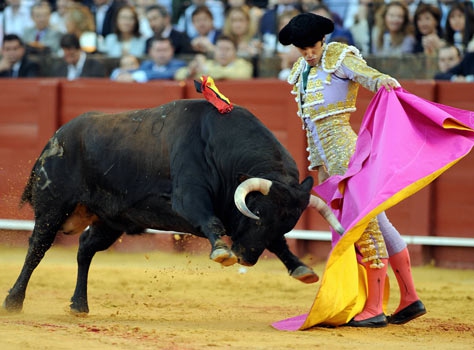 When and Where to See Bullfighting in Spain

Bullfighting is a spring to autumn sport with Sundays being the busiest days. Madrid holds the San Isidro Bullfighting Festival in June at La Plaza de Toros de Las Ventas. Seville begins its bullfighting season during Seville’s Feria de Abril at the Maestranza Bullring in April.

There're some famous bullrings in Spain you can go for the exciting event:

How to Get Bullfighting Tickets

If you would like to experience bullfighting in Spain, tickets are bound to be one of the things you should take into account. When buying bullfighting tickets, it is important to know that the tickets are not usually computerized. Since bullrings do not have much of a web presence, if you want to buy your tickets ahead of time, it is best to buy your tickets from a broker. Most of the time, it is best to purchase your tickets directly from the bullring. Make it your first stop when you get to your destination.

Prices of tickets vary depending on where you sit and who is starring in the bullfight. Tickets can get expensive, so here is a guide to help you:

Bullfighting was introduced to the Western world in The Sun Also Rises by Ernest Hemingway. Since its introduction, bullfighting has continued to grow in popularity and attract tourist from all over.
1

What It Is About

Held in a round shaped arena called plaza de toros, bullfighting in Spain is an event that consists of six individual fights. There are 3 toreros, each fights two bulls. Each event begins with a parade that presents the toreros to the audience.

After the parade, the fights begin. The bullfighting is divided into three stages:

The senior torero will be in fights one and four, followed by the second oldest matador in fights two and five with the youngest (or least experienced) fighting in the third and sixth fights. If at any time a matador is injured to the point that they cannot fight, the senior matador will continue in their stead.