One of the most confusing word pairs in the English language is “affect” and “effect.” One of the reasons for this “affect” vs “effect” confusion is because they have similar meanings. “Effect” comes from the Latin word effectus which means “to bring about.” On the other hand, “affect” comes from the Latin word affectus which means “to act on.” So how to use them correctly? 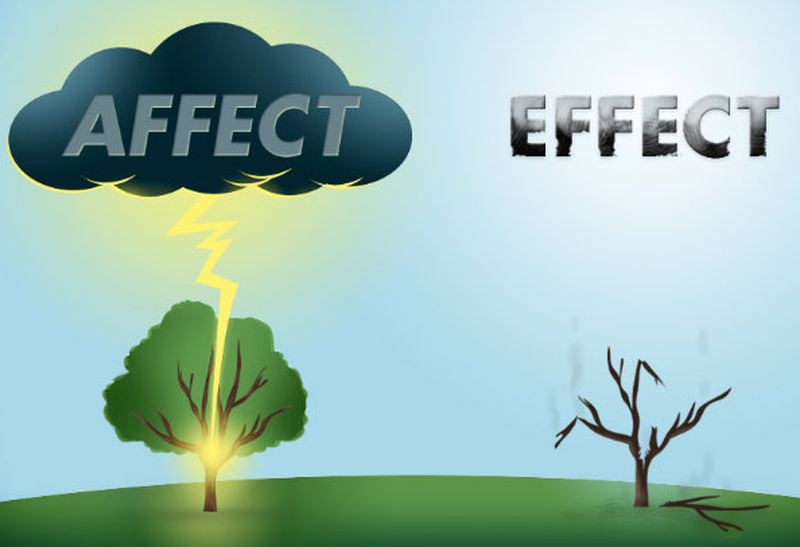 Affect vs Effect: What Are the Differences?

One of the reasons that the “affect” vs “effect” dilemma is so confusing is because they are homonyms, which are words that are similar, but do not have the same meaning. Examples of other homonyms include "accept" and "except", "right" and "write", and "their" and "there."

What Are the Differences?

“Affect” and “effect” are different in that “affect” is generally a verb and “effect” is generally a noun. A good mnemonic to remember this is to recall Edgar Allen Poe’s narrative poem, “The Raven” and knowing that the word “raven” spells out “Remember Affect [is a] Verb [and] Effect [is a] Noun. With respect to meaning, “effect” refers to something that happens in response to a prior event or cause. “Affect” refers to the action or changing something. Another way of remember this is to understand that an “effect” is produced when something is “affected.” The following will give detailed information about “affect” and “effect.”

1. Affect refers to acting or changing something through influence.

2. Affect can be used to refer to an emotional response to something.

Example: The news of their teacher's death did not affect the students.

3. Affect can be used within the context of attacking something.

Example: Cancer can be affected with chemo therapy.

1. Effect is used when referring to something that exists due to a cause.

Example: The snow day had the effect of canceling the plane flight.

2. Effect can refer to the ability to obtain a result.

Example: The effects of cigarette smoking include death.

3. Effect can refer to a scientific theory

Example: Some digital thermometers are based on the Seebeck effect.

Affect as a Noun

Meaning: refers feelings that are external

Pronunciation: pronounced with an “a” sound like the “a” in the word “action.”

Example and Explanation: This article was about Mary's perspective on pop music, she believe pop music had positive affects on children as well as the negative affects. (In this example, the word “affect” is referring to the feelings of children.)

Effect as a Verb

 Meaning: refers to the act of doing something.

 Pronunciation: pronounced the same way as when it is used as a noun.

 Example and Explanation: By volunteering in their place of work, people can effect change in their neighborhoods.

Think you now understand “affect” vs “effect?” Click here to take a quick test to check your knowledge.